a) The after-tax cash flows for the two options are:

b) The Net Present Value (NPV) of the two alternatives using an after-tax cost of debt of 8% is:

c) Based on the NPVs of the two alternatives, I would recommend JLB Corporation to purchase the research equipment as it has a lower cash outflow than the leasing alternative. The cash flow after the three –year period is identical for both the alternatives thus the difference in the present value of the outflows of the three years is the basis for this recommendation.

[2] The following will be the after-tax cash flows for the next three years under the debt (with warrants) alternative:

e) [1] The following will be the after-tax cash flows for the next three years under the financial lease alternative:

Problem 17-1:
a) If the Connors do not make the acquisition, for the next 15 years Salinas Boots will have the following tax and earnings:

b) Since the acquisition would not change the pre-tax profits, the tax liability would be $112,000 and the after-tax earnings would be $168,000. Both would remain unchanged for the next 15 years.

c) Based on the tax considerations, it would be a feasible action for the Connors to acquire Salinas Boots for $350,000 in cash. This is because of the fact that the $800,000 tax loss carry forward can be easily adjusted over the next fifteen years so that the tax liability of Salinas Boots will be lesser and the after-tax earnings would be higher than $168,000 per year. This cumulative earnings over the 15 years will have a higher value than the $350,000 cash payment today. Since Salinas Boots falls under the 40% tax bracket, the carry forward tax loss can be used to save significant amount of tax dollars. 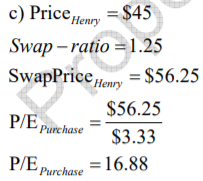 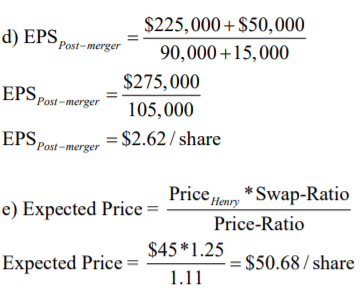 I would expect the share price of Henry Company (after the merger) to e $50.68/share. This is because of the price ratio of the stocks being different from the actual swap stock ratio. This difference will drive the price down from what is would have had been if the two ratios had been the same.

The conflict between not paying bribes and maximizing shareholder wealth is clearly inevitable. Paying bribes would mean that the shareholders’ value would be maximized since the cash inflow generated from the bribes would be higher than the outflow of the bribes – this makes sense or else companies would not be paying bribes. If a company does not pay a bribe at all while doing business abroad, it will be confined to ethical standards, however, its competitors would be taking away the benefits of the market by paying the bribes. Thus there exists a conflict between ethics and the accountability towards shareholders of the responsibility to maximize shareholder wealth (Ross, Westerfield & Jaffe, 2008).

Foreign competitors paying the bribes would be able to maximize the wealth of their shareholders but at the cost of their ethical values. Thus, it is a very precarious decision that needs to be made for the management of companies operating abroad. The decision to pay bribes naturally would mean shareholder wealth would increase, however, the cost of losing an ethical position for the company could prove to be detrimental in the future. Thus, the choice is a difficult one for management leaders to make and often the pressure of shareholders can lead to companies foregoing their ethical considerations for the return of the shareholders to be decent.

Popular Essays
We Can Write
Your Essay

FIND OUT MORE
A limited
time offer!
Save Time On Research and Writing. Hire a Professional to Get Your 100% Plagiarism Free Paper